US Independence Day celebration at the United States Consul General’s residence in Belfast. 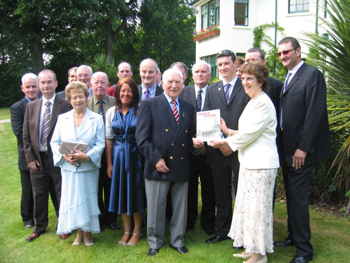 Picture the scene - a lovely Summer's evening, the soft and gentle background music of a string quartet, a glass of champagne in your hand, beautiful surroundings, rubbing shoulders with the great and the good of Northern Ireland society and the most memorable image of all - members of the WLHA wearing suits and dressed to the nines in finery other than military uniform.

What was the occasion? Well, members of the WLHA were invited to attend The U.S. Consul General's Independence Day Reception on the 26th of June at her official residence in Belfast. The reason? A token of appreciation and a "thank you" from Susan Elliott, the outgoing Consul General, on behalf of the US Government to those people and organisations who had done something special for her or the USA during her time in Northern Ireland. 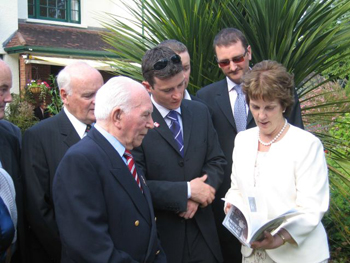 (US WW2 Veteran Teddy Dixon with the Consul)

The WLHA had come to Susan's attention at the Eisenhower Commemoration ( follow site links for coverage and news footage ) in May in Enniskillen when the club, along with some of it's friends, staged a 65th anniversary re-enactment of Eisenhower's inspection of US troops at Portora before they embarked on their dangerous mission to Normandy.

That people cared and went to great lengths to remember and recreate such an important part of Northern Ireland's and the USA's shared history made a very great impression upon her. She was genuinely moved by the efforts of the club and the lengths it went to in preserving a memory, not only of that single occasion, but of a period of her nation's proud history. 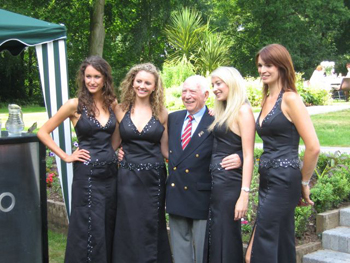 Members of the club were delighted to accept the invitation to the reception and it was certainly an occasion to remember. As a token of thanks the club presented Susan with a signed copy of “Passing Through” by local historian John P McCann. Honorary WLHA member and US WW2 veteran Teddy Dixon signed the copy of the book and presented it to the Consul. The book recalls many of the experiences of US troops based in Northern Ireland in WW2.

The WLHA would like to thank Susan Elliot and her staff at the Consulate for their kindness, hospitality and interest in what we do. We wish her the very best in her new post in Moscow.