Due to our high level of professionalism the media, especially the film industry have been taking a great interest in the group. So much so that in the clubs four years of existence members of the WLHA have appeared in two major TV and Film productions. 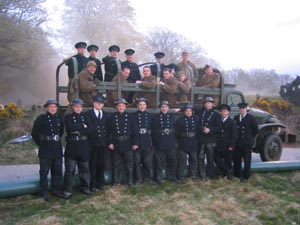 Our special ability action extras had the skills required to operate a WW2 anti aircraft gun and carry out ARP search and rescue scenarios during the Belfast Blitz scenes in Closing of the Ring.

Closing the Ring,  directed by Sir Richard Attenborough, is scheduled for release in April 2007.

To view us in action click on the images below:

As part of the RTE series Hidden History, Mint Productions covered the early life of Frank Aiken. WLHA members had the challenging task to provide both the renegade IRA flying Column as well as members of the B Specials. The familiarity with weapons and tactics,  allowed us to bring to life the fire fights between the IRA and B Specials of 1922.

After the success of the Frank Aiken production, The WLHA were asked to take part in an other period documentary for RTE and the history channel based the conquests of Oliver Cromwell In Ireland, The members of the club had to take on the role of an Irish Army facing Oliver Cromwell in the field of battle. To do this, we were trained in the use of the match lock musket and various other period armaments.

To view us in action click on the image below:

The Author John McCann's book Passing Through based on the experiences of the 82nd Airborne Division in Northern Ireland has recently been made into a 1 hour documentary for the BBC. The club provided all the props, personnell and logistical support

required to bring the flash back scenes for the film to life. Click on the images to see behind the scenes video clips

Loose Horse Productions required the assistance of the WLHA to shoot some of scenes of the documentary based on the history of GAA. They required to club to provide 1970's Military Equipment and actors to play the role of British Soldiers manning check point. To view behind the scenes footage click on the image.

What WLHA bring to a production is a wealth of knowledge and experience in handling both Live and Blank firing weapons. Each member of the club undergoes full fire arms safety training by qualified instructors. This give us a distinct advantage over untrained agency extra's who would require full firearms training.

For further information contact the secretary at the club address shown below: